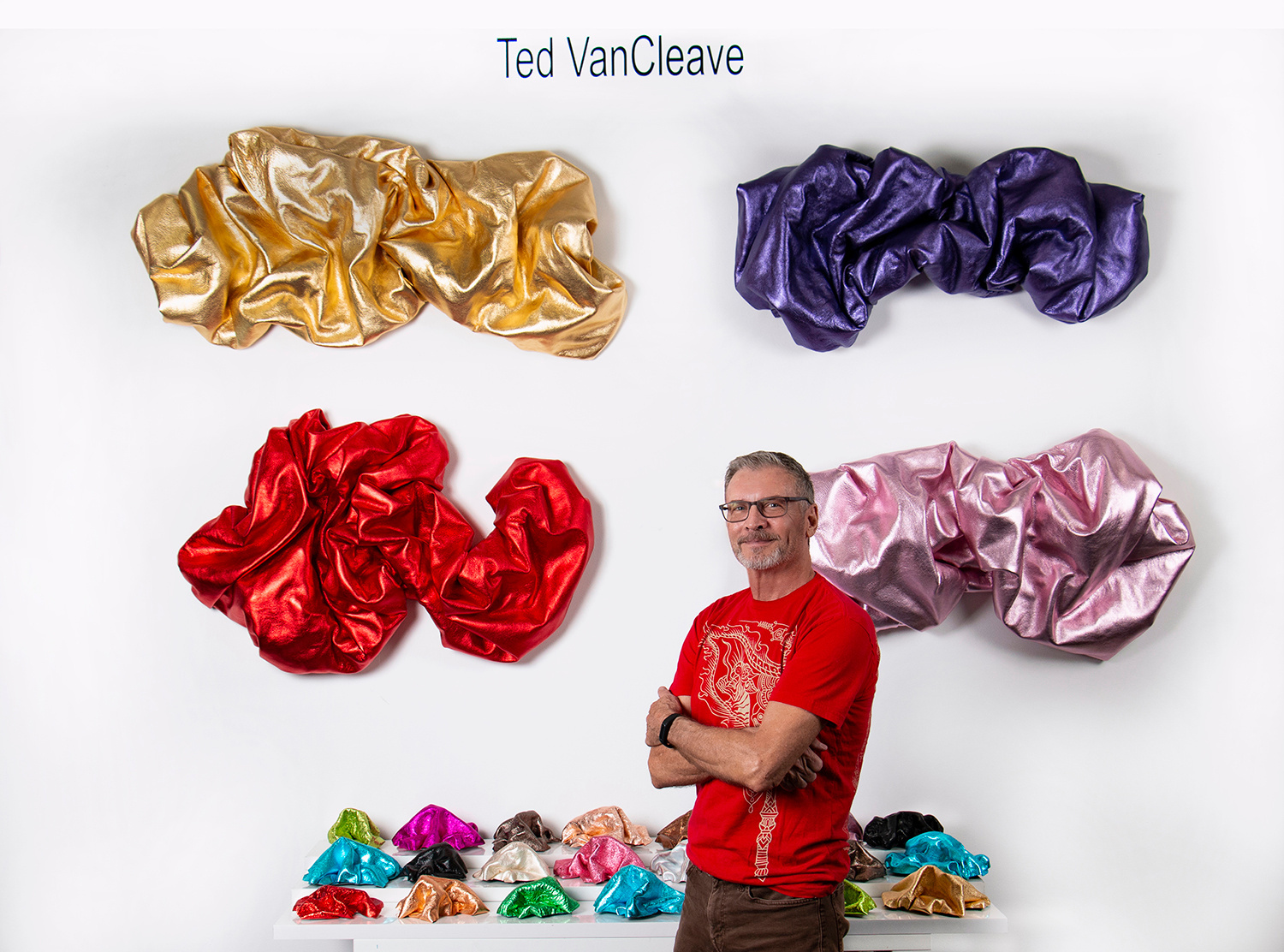 Multidisciplinary artist Ted VanCleave has been creating his unique visions for more than forty years while living in San Francisco, Los Angeles & Miami before making Saint Petersburg his home in 2017. VanCleave's new Drape & Amoeba sculpture series are a fusion of fluid and organic shapes bathed in bold colors. The medium is leather as it's never been experienced before. Each piece is a meditation in form and every angle is a different story. The flow, the folds, the peaks and valleys plus bold metallic finishes make them endlessly interesting, adding new energy to any space.

Artworks by VanCleave can be found in collections in the USA and internationally and have been acquired by the Frederick R. Weisman Art Foundation as part of their permanent collection. His work was exhibited at the Dali Museum in 2018. He's also exhibited widely during Art Basel in Miami including Art Miami, Art Miami Context and Aqua Art Miami. His work was exhibited in four major fairs simultaneously via four top international galleries. His interviews on CNN among others have received a worldwide audience.

2008
WestWeek at the Pacific Design Center in Los Angeles

Ted VanCleave’s abstract, architectural photographs of Los Angeles depict a fantastical, futuristic vision of urban landscape. Forceful lines and curves of cement soar across skies saturated with expressionistic colors. The vertiginous angles, blocks of solid color, and disorienting geometry create a picture space wherein solid forms become pure abstraction. Only an occasional reference to the surrounding environment or the colors of the natural world remind us that this is Los Angeles, a real place, as reinterpreted by VanCleave’s painterly vision. Eyemazing Magazine

Ted VanCleave has captured the urban landscape of Los Angeles by focusing on the city’s unique style of modern and postmodern industrial architecture. His photographs of the city’s architecture extend beyond representation and become brilliant, almost surreal, abstracts that juxtapose vibrant color and the geometry of the city’s landscape. VanCleave’s color palette expertly plays with photography’s unique ability to capture subtleties in light and shadow, adding a richness and narrative depth to his primarily abstract form. Metro Gallery, Los Angeles CATed VanCleave provides vivid images of inspiring architecture, transcending time and space and capturing glimpses of vitality amid vast swaths of urban drudgery. 21st Century Architecture

Judging
Everyman Pro Photo Contest - Ted is a judge for the 3rd Annual Everyman Pro Photo Contest. Results were announced Thursday July 1st, 2011Television
2008 - "Dirt"/ FX / ABC Television - Courteney Cox stars and is Executive Producer. Four 45"x60" images from the new Hollywood Sign Series are featured in the show for season 2.
2006 - "The X Effect" /MTV - Several VanCleave photographs are used as decor throughout the show.
2003 - "One On One"/ The WB - Several VanCleave paintings were featured in the gallery scene.

‘Abstract Reasonings’, an open juried competition for California artists selected VanCleave’s ‘OPOB 11’ to be included in its gallery exhibition. The work selected is an abstract oil pastel on black paper. The exhibit was held at the Mark Reuben Gallery of Sausalito, CA.

Art of California Magazine’s Discovery AwardsCompetition bestowed VanCleave with a Bronze Award in the mixed media category. The purpose of the competition was to uncover emerging California artists. The competition’s jurors included Henry Hopkins, director, UCLA Wight Art Gallery and Chairman of the Art Department and Philip Linhares, Chief Curator of Art, The Oakland Museum.

The Dougherty Arts Centerin Austin, Texas has chosen one of VanCleave’s recycled Eco Art paintings to be included in its "Our Fragile Environment" exhibition. The purpose of the competition and the exhibition is to examine the relationship between art and the environment.